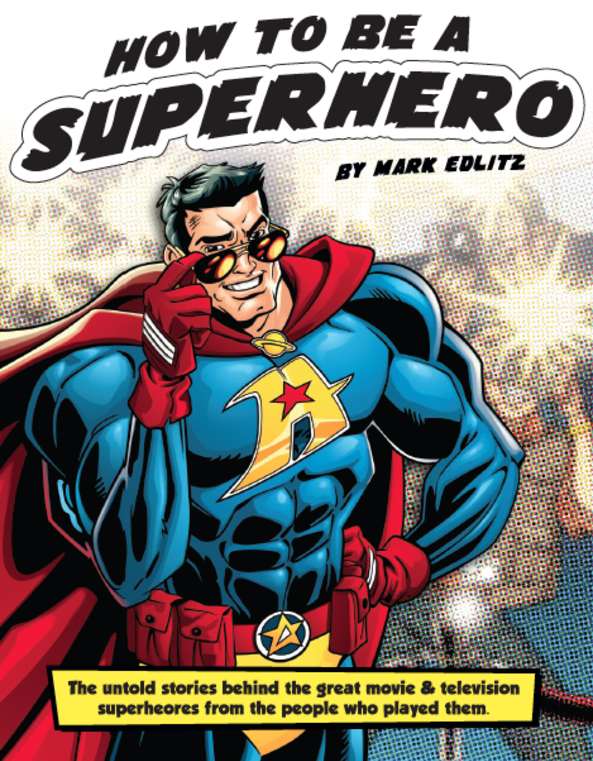 How to Be a Superhero​

How to Be a Superhero is a must-read for any comic book fan!

"You don’t have to be a die-hard fan of the Marvel cinematic universe to appreciate what Edlitz has done here...If you want to learn more about the genre that has dominated the current zeitgeist, hear the hard truths about Hollywood, or just gain some trivia to impress your friends at parties then How to Be a Superhero is right for you."
-- Aint It Cool News

“To be, as Chris Reeve put it, “a temporary custodian” of these stories, myths really, is a very subjective experience. To be taken into the mind and thought process of others who have had that experience is a fascinating journey. Mark Edlitz's How to Be a Superhero really takes you into what it means not only to be the people who play them, but into the mind of a superhero.”
-- Richard Donner, director Superman

"Mark Edlitz's How To Be A Superhero delivers rare insights into the mindset of the men and women behind the world's most beloved heroes and villains.  A supremely fun read."
-- David Hayter, screenwriter of X-Men, X-Men 2 and Watchmen

“If you think that playing a superhero or super-villain is just another job for an actor, think again! In Mark Edlitz’s How to be a Superhero, we find out that playing characters such as iconic heroes Superman and Batman and hiss-worthy villains like Loki and Catwoman seems to imbue performers with a sense of responsibility worthy of Spider-Man himself. Edlitz’s impressive knowledge of not just superhero movies and TV shows, but of the comics that they’re based on, enables him to ask incisive questions that get the actors talking about their super-roles in a way not many interviewers can do. The book is a unique take on the superhero phenomenon and well worth reading.”
-- Danny Fingeroth, author of Superman on the Couch: What Superheroes Really Tell US about Ourselves and Our Society

“A fascinating read.  Edlitz has assembled an impressive lineup of superhero actors for interviews and also offers intelligent insights into the genre.  5-stars and highly recommended!” –
-- Raymond Benson, author of more than 30 books including The James Bond Bedside Companion

"This superpowered collection of more than 40 original in-depth interviews explores the role of superheroes in pop culture.... In his impressive debut, Edlitz interviews actors who have played parts in shaping modern America's quintessential mythologies: the superhero universe....  [The author's] lengthy introductions to each interview are packed with enough background info and trivia to please even hard-core fanboys.... Edlitz's insightful questions also explore weightier topics such as religion, mythology, race, and the nature of heroism.... [An] all-out victory."
--Kirkus Reviews

“I might not be able to ask the fellow closest to being Superman or Batman what he thinks, but Mark Edlitz has, and readers will be fascinated by what he found out.”
-- Dr. Jeff McLaughlin, contributing editor of Comics as Philosophy and Stan Lee: Conversations

How to Be a Superhero perfectly captures the convergence of fantasy and reality by documenting—for the first time ever—the thoughts and feelings of so many of the actors who, by their portrayal, have brought these fabled characters to life.”
-- Arlen Schumer, author of New York Times pick The Silver Age of Comic Book Art

"How to be a Superhero makes for great reading, Edlitz's questioning smart and insightful. His subjects play along well, giving considered and equally insightful answers. A cracking read full of great personalities and personality."
-- Starburst Magazine

View on Mobile
Mark Edlitz, author of How to Be a Superhero